Vote for Your Sports Star of the Year 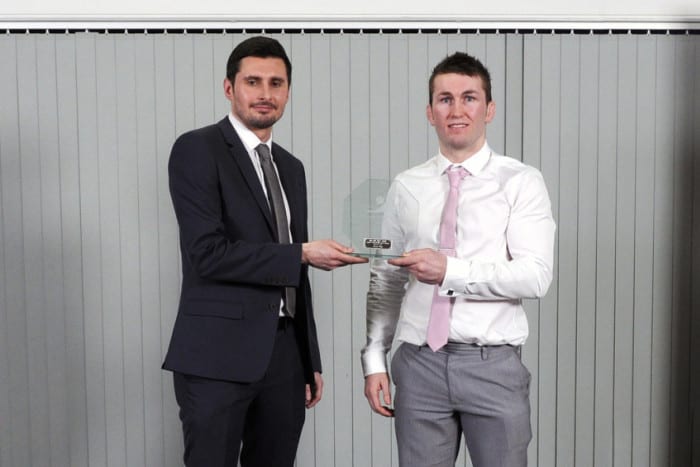 The countdown is on to the 2016 Kirkcaldy & Central Fife Sports Council awards.

The annual awards, supported by The Fife Free Press Group, is the largest celebration of sport in the Kingdom.

The event, which is now in its ninth year, pays tribute to the achievements of amateur sports men, women and children from the local area.

But this year, for the second time following a succesful launch last year, we will also honour our top sports professionals in the Fife Free Press Group Sports Star of the Year award.

A shortlist has been produced for this prestigious award, currently held by Kirkcaldy UFC star Steven ‘Braveheart’ Ray, with the winner to be decided via an online vote.

Vote for your favourite now using our poll above, which will be refreshed weekly so you can vote more than once.

To help you decide on the most deserving winner, you can read a brief description of each nominee’s achievements by scrolling down the page.

Nominations are also open for the other eight award categories – open only to individuals and clubs with amateur status – and the winners will be decided by an expert judging panel in the new year.

The awards up for nomination are Junior Award (born 2001 or later), Youth Award (born between 1996 and 2000 inclusive), Senior Award (born 1995 or earlier), Disability Award, Coach of the Year, Junior/Youth Team Award, Senior Team Award and Service to Sport Award.

All winners will be announced at the awards ceremony in Fife College’s St Brycedale campus in March.

WHO IS YOUR SPORTS STAR OF THE YEAR?

After claiming the title with Beechdean Motorsport in 2015, the Kirkcaldy ace transferred to TF Sport for the 2016 campaign and retained the title with team mate Derek Johnston, overturning an 11.5 point deficit in a sensational season finale at Donington Park in September.

Another highlight of Jonny’s year came in June when he realised a lifelong dream by racing in the prestigious Le Mans 24 – the world’s most iconic endurance race. To cap off a dream year, Jonny also competed in his first FIA World Edurance Championship and claimed a top 10 finish.

EMMA MITCHELL (women’s football): Fife’s top female footballer has had a career-defining year in her profession.

Emma, from Buckhaven, was part of the Arsenal Ladies side that lifted the Women’s FA Cup in May, defeating Chelsea 1-0 in the final at Wembley. The match was played in front of a record crowd of almost 33,000.

The 24-year-old, who plays left back or striker, was also part of the Scotland Women’s side that qualified for their first major tournament. Anna Signeul’s girls finished second in their Euro 2017 qualifying group and secured one of the six best runners-up spots.

To date, Emma has won 47 caps for her country, scoring seven goals.

LEWIS STEVENSON (football): Lewis, from Kirkcaldy, is Hibernian’s longest-serving player, but 2016 was the year he became a true club legend.

The former Balwearie High School pupil was part of the Hibs side that beat Rangers 3-2 in the Scottish Cup final at Hampden in May to bring the coveted trophy to Easter Road for the first time in 114 years.

As the only survivor from the club’s 2006-07 League Cup winning side, it also made him the first Hibs player in history to win both national cup competitions.

The left back, who made his 300th appearance for Hibs in February, will be rewarded with a testimonial next season and nearly 1000 attended a gala dinner is his honour in September. Lewis is donating over half of his testimonial proceeds to charity.

DEREK RAE (paralympics): While not strictly a full-time professional sportsman, Derek’s achievements in 2016 certainly make him eligible for this award.

Derek has overcome a life-threatening motorcycle crash in 2010 to become one of the world’s top disabled marathon runners.

So much so that he was selected to represent Great Britain in the Paralympic Games in Rio during the summer. To achieve the qualification time, Derek put in the performance of his life in the IPC World Marathon Cup in London in April. Derek succumbed to heat exhuastion and did not manage to finish the T46 marathon in Rio, but simply making it onto the world’s biggest disability sport stage was a huge accomplishment. Derek has now started his preparation for the Tokyo Paralympics in 2020.

No Replies to "Vote for Your Sports Star of the Year"