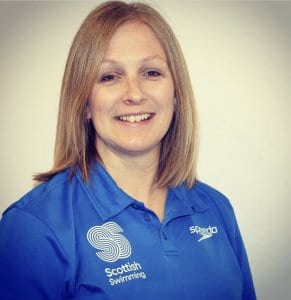 With the selection period for the Gold Coast 2018 Commonwealth Games set to open on 1 January, preparations for Team Scotland’s swimmers and divers have received a boost with Aquatics the first of the 18 sports on the programme to appoint their sport team manager.

Commonwealth Games Scotland and Scottish Swimming are pleased to announce that Lindsay Lewis will lead the sport at the Gold Coast Games, bringing a wealth of experience from her work as team manager for both Scottish and British Swimming.

Lindsay already has experience of a Commonwealth Games as a Clydesider, working at the swimming competition at Glasgow 2014 and is looking forward to being part of Team Scotland at the 2018 Games.

“I loved volunteering in Glasgow,” she said. “I could see everything that was happening with the team but was watching what was going on from the outside. There was a great buzz around the place and I felt very proud, not just when the athletes won medals, but watching them work together and support each other.

“I can’t wait to get started and support the team. I’m very honoured to have been given this opportunity and will work hard to ensure that the only focus that the coaches and swimmers have is that of performance.”

Welcoming Lindsay to Team Scotland, Jon Doig OBE, Team Scotland Chef de Mission for Gold Coast 2018 said: “The sport team managers for each sport on the Games programme play a vital role, working closely with Commonwealth Games Scotland professional staff to create the best possible environment for athletes and staff from each sport to excel at the Games, as well as bringing them all together as one Team Scotland.

“I’m delighted to have a team manager of Lindsay’s calibre on board so early and look forward to working with her as Team Scotland aims to have its best ever overseas Games in Gold Coast.”

Delighted with the appointment and looking ahead to a busy build-up before the Games open in Gold Coast on 4 April 2018, Alan Lynn, National Coach at Scottish Swimming said: “I’ve worked with Lindsay on several national team meets and camps and she is a great addition to the aquatics team heading to the Gold Coast. She is calm, extremely well organised and has a great ‘can-do’ approach to everything. I’m delighted that she is on board so early in the process ahead of what will be a busy 16 months.”

Sports team managers for the remaining 17 sports on the Gold Coast programme will be appointed in early 2017.

Vote for Your Sports Star of the Year